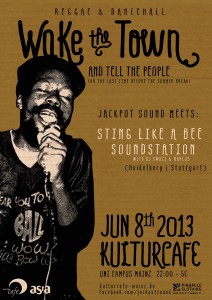 Wake The Town And Tell The People! *Stingpot Round 2*
For the last time before the Wake The Town summer break we’re gonna bring back our friends in crime Sting Like A Bee Soundstation again. Now with Dj Swazi and Marcus Sting on the Mic.
So if you’ve missed the last dance we really hope to see you this time! …
Spread it around and tell your friends cause sharing means caring!
————————–————————–—
08.06.2013 / 22:00 / 5 € / Kulturcafe Mainz
————————–————————––
About Sting Like A Bee:
COOL & DEADLY – RAZORSHARP – MOS CREATIVE – EXCITING – EXPERIENCED ….
… attributes people associate with Sting like a bee Soundstation.
From the humble beginnings in summer 2003 – when the south german sound officially kicked off – up until today the crew, including Marcus Sting, Feb, Steven and Nick, has never stopped developing their skills and musical selection further. … Sting is playing music in jamaican tradition – operating with a MC, selector and special efx – while never denying their european origin. The team applies a high standard, never settling for less than the best music, the most passionate performance and exclusive entertainment. With each member possessing a decade or more of experience in reggae and dancehall and a unique chemistry, developed in over 5 years of playing together, Sting can definitely handle every kind of musical task.
Their musical arsenal covers everything from 1950’s Rhythm and Blues to 1960’s Ska and Rocksteady to 1970’s Roots Reggae and Rub a Dub to 1980’s computerized, digital Reggae and early Dancehall to the 1990’s Hardcore Dancehall to the modern sounds of the new millenium and hip hop flavors. Within the last 5 years Sting has pleased crowds in almost every major german and some other european cities, while sharing the stage with some of the great performers of the genres.
Both associated with underground originality and crowd pleasing routine the team leaves nothing to be desired. The strong passion for Soundclashes, musical battles with other sounds, resulted in tons of heavyweight, exclusive dubplates (unique recordings for sounds) and three trophies. Sting has never lost a soundclash yet and has sounds living in fear from Germany to Alaska.
————————–————————––
08.06.2013 / 22:00 / 5 € / Kulturcafe Mainz
————————–————————––
More info:
http://www.kulturcafe-mainz.de/
http://www.jackpot-sound.com/
http://www.facebook.com/jackpotsound
http://www.facebook.com/stinglikeabeesound 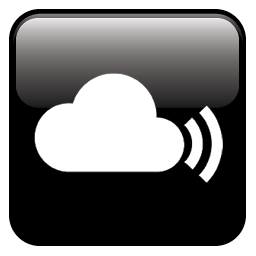